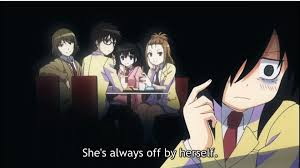 That’s the Japanese (kana+romaji) version of the title of this post. Yes, this post is going to be about a manga/anime. But before you close the webpage thinking you were going to read something deep and meaningful, don’t… because I have a point for writing this.

The main character in WataMote is fifteen year old Tomoko who has just started high school believing she will make her ‘high school debut’ and become popular as soon as she enters. But of course, Tomoko is a shy, awkward unsociable loner so this doesn’t happen… The story is about her (failed) attempts to improve her status and finally achieve popularity.

While watching this anime/reading the manga (I’m doing it at the same time because I couldn’t wait till I finished the manga :3 ) I found myself thinking things like ‘Come on, Tomoko! Just tell the lady what you want to order!’, or ‘Just say something natural. Don’t work so hard to think of a (bad) pun to tell those boys!’ and I realised I was thinking about the stuff that people normally tell me, for example ‘Just talk!’.

Tomoko’s kind of in the same situation as me- she’s shy, has a limited number of friends (okay, she only has one), she doesn’t know how to start or keep a conversation going, she has strange thoughts (not going to expand on this), may be deranged and the most obvious one- she’s an otaku (though she’s not that into BL)

Although I watch/read WataMote mostly for the laughs, I also analyse Tomoko’s behaviour and think about my own life. Sometimes, seeing your life from the sidelines helps you to realise your problems, understand what they’re caused by and possibly come up with solutions.

3 thoughts on “Social Anxiety: ‘It’s not my fault that I’m not popular!’”